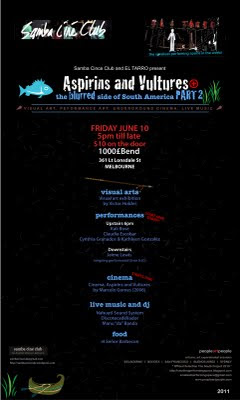 the blurred side of South America in dISTORSION II 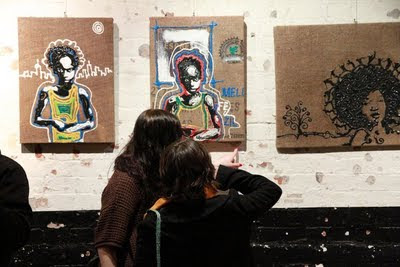 Photo Antony Kraus
Victor Holder was born in Venezuela and has lived in Australia for the last 10 years. He is a visual and graphic artist, with a particular interest in the concept of reconnection with ones spirit through his eclectic vision of life on Earth and divinity, integral parts of all cultures and human beings. He achieves this through the creation of visuals, animations and large painted art works 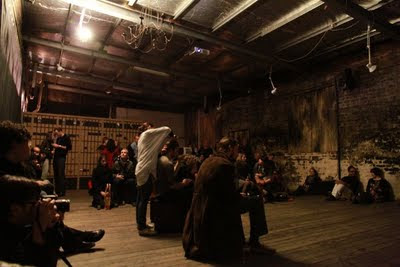 Photo Antony Kraus
Kali Rose graduated last year from Post graduate performance studies as VCA. Her research is led by practice with current investigations into hair, intimacy and it's environment. She is one of the four members of 'Transparency Collective".

“One day, I will be dangerous’ 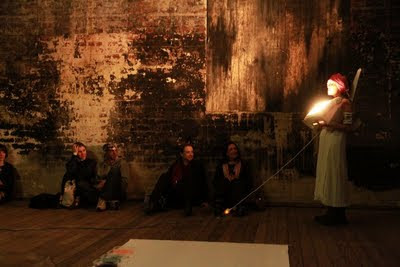 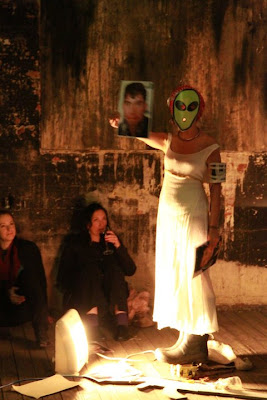 
Claudia Escobar is a Colombian theatre-maker and performer based in Melbourne. Escobar’s artwork has been internationally catalogued as effective and deeply provocative. She has devised and directed a series of performances, theatre works and visual arts projects with children raising spectres of childhood and war. Her most recent work includes: play:ground (Writer and Director, Australia, 2008), Branch Nebula’s SWEAT (Devisor & Performer, IN TRANSIT 2011 Berlin, Performance Space Season 2010 Sydney and Dance Massive 2011 Melbourne) and manola (solo work, Live Arts Performance Space Sydney 2010). Co-founder of EL TARRO, the smallest performing space in the world with performances in Australia, Colombia, Argentina and USA and peopleartpeople, arts organization linking people through the arts with prjects in Australia, Colombia and Afghanistan. 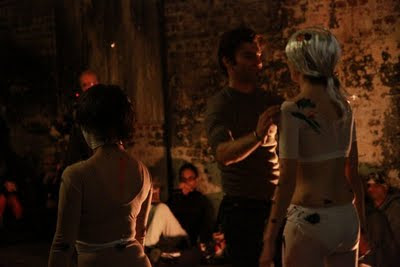 Photo Antony Kraus
Colour Melos is an interactive performance piece that follows an extensive artistic exploration of the sense of touch and the role this sense plays in our everyday interaction. The title came from a phrase in Bruce Chatwin’s book The Songlines: “Melos: Greek for ‘limb’ hence ‘melody’ ”, and relates to how when we touch someone it’s almost like a choreography which can flow beautifully or be a little awkward. In this piece, the audience is invited to paint using their hands on a “living canvas” to create their own artwork.
Cynthia Granados is a Melbourne-based Mexican artist, completed a Bachelor of Media and Communication in Mexico City, a Master of Art in Public Space in Melbourne and is currently finishing a Graduate Diploma in Arts Management at RMIT University for which she received a scholarship from the Mexican National Fund for Culture and the Arts (FONCA).

Her artistic practice involves researching how we interact through the sense of touch in different cultures. She has created a series of installations under the title of OutsideIn, an exhibition on what you can touch but not see, and what you can see but not touch, that has been shown at Nine on Seven, Rooftop Bar, Curtin House, and RMIT Art Spaces, as well as the interactive painting performance Colour Melos, presented for the first time in Renaissance Village Festival 2011.

She is also exploring Alejandro Jodorowsky’s Psychomagic through collective healing performances such as UnMarriage to heal from past-unresolved loves. The next one, Monarca, took place on Federation Square on the night of June 23rd as part of the Light in Winter Festival. 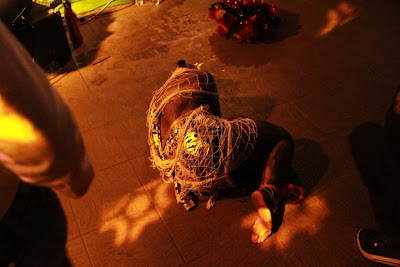 Photo Antony Kraus
Kathleen Gonzalez was born in Bogota Colombia, Kathleen has been dancing flowing through her veins since the age of nine. She brings a sense of joy to those around her.

Kathleen has been dancing for local and international dance companies, using ballet, folk and contemporary styles to express herself.

Considered a technical professional in contemporary dance, Kathleen studied at the Academia Superior de Artes de Bogota and has received numerous awards at both local and state level in Colombia. She was part of the prestigious and internationally recognized Colombian Ballet Group of Sonia Osorio, and is recognised for investigating the theoretical and practical shades of traditional Colombian folk dance, which informs her unique style. Also a teacher, she now finds herself in Australia to evolve as a dancer and discover more of what inspires her. 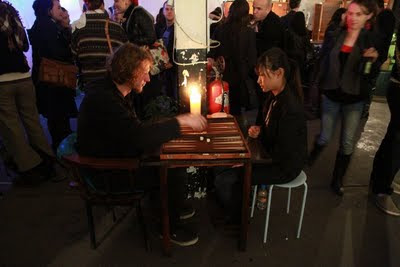 Photo Antony Kraus
In November 17, 1858, Dalipie and Dalinkua sent the first of a series of letters to the Moreton Bay Courier as “Delegates for all blackfellows.” The letters were an appeal almost, for humanity, for fairness – a reflection of the living conditions of the indigenous community. Of Chance and Strategy, contemplating on these letters, Jamie invites you to an intimate game of Backgammon.

Jamie Lewis is a Singaporean performance artist. Currently based in Melbourne, her work investigates the thresholds of audience engagement through the experimentation with the Live. The form of her work is determined by the nature of collaborations and provocations through the process of creation, though her current explorations are in the intimacy of one-on-one performances in the public-ness of the city.

Her background in Theatre of the Oppressed work with Drama Box (Singapore) has taken her to the streets of Bangalore, India, youth in Singapore schools and workshops with Augusto Boal in Omaha, USA. She graduated with a B.A.(Hons.) in Theatre and Performance at LASALLE College of the Arts (Singapore) and completed her Postgraduate Diploma in Performance Creation at the Victorian College of the Arts (Melbourne).

Set in the outback of arid Pernambuco, this highly acclaimed Brazilian road movie tells the story of two young men, one escaping war, the other poverty, who embark on a road trip in 1942 setting up moving picture-shows in order to sell aspirin, a recently invented wonder drug. This is a film about a moment in time and a place in Brazil. It is about today. It is about a time in our lives and a place in our souls, about compassion, war, peace, what we must give up, leave behind, in order to get to our destinations.

Manu da banda: An itinerant musician wandering around the world, percussionist of afro and afro-latin rhythms, guitarist, singer and songwriter…. this is Manu and his band. This originally Chilean band is very influenced by the afro-latin rhythms. Promises of a great live performance!!!!

Nahuatl Sound System represents the anger and force that has emerged through the struggle of people not only from today but from yesterday and tomorrow in terms of a conscious sound revolution.

Discotecadéliador might hail from the Brazilian capital, Brasília, but he prefers the politics of rhythm. Expect high-tech sounds from the Amazon; muddy beats from the dry Northeast of Brazil and drums from all tribes of the globe. Sexy stuff that you haven't heard but will try to dance to. Favela or chic? It'll take some sweat before you know...

Guido Bambaataa(Dj Resident) : A show man himself! With his ''favela Pimp'' style, bringing the latest in Brazilian music, Funk, Baile and Hip Hop...

El Señor Barbecue, one of Melbourne's finest BBQ caterers, with a passion for food and cooking. On offer: an Argentinean influenced menu, with BBQ Asado (ribs), sausages, chicken dishes, refreshments and salads.